Here is a flier I actually made in 2013... I'm not sure why I haven't posted it until now but it seems appropriate. 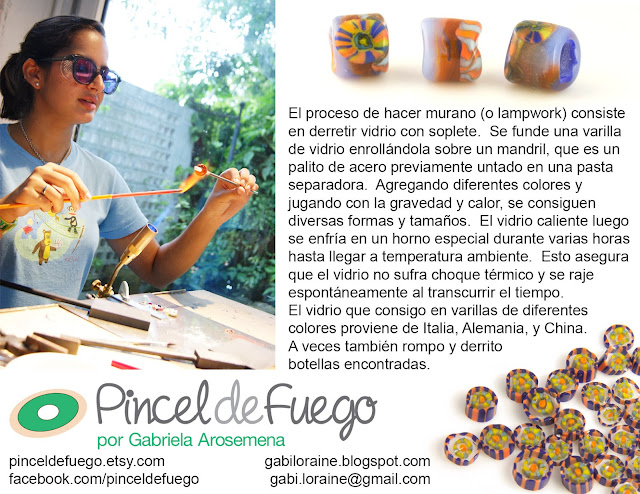 I still love it and use it to advertise myself.  It's short and simple and really doesn't show enough of what I do, but it should be enough to catch viewer's attention to find out more and hopefully visit this blog?

On to the bochinche.

Things are chaaaanging again.  Things never stop changing (shit happens, and shit changes), but these are some major changes, and I'm feeling like lists rather than prose.


so... yeah.  Not sure about the middle-term future of lampworking.  Teaching Art at the Met was an amazing experience which really helped me grow as an educator, but I am once again wondering about my passions.  I won't sit here and pretend like my husband's income isn't a factor in my decisions - as he grows professionally, my dreams of "becoming an artist" or living to make art become more enticing.  I won't say realistic, because I am all too aware of the possibility of failure... but I want to actually try and stop being so chicken.  Which is the logic behind that last bullet point.

Oh, and I haven't blogged in here in over a year, so I have some serious catching up to do, which I intend to do, ...because I think it helps?
And I do have some pretty cool pictures to share.
I'll stop rambling.  My brain hurts.

Email ThisBlogThis!Share to TwitterShare to FacebookShare to Pinterest
Labels: a time for change, about my job, about my life, actually about art... ::gasp::, graphic design, just my humble opinion

Please don't leave anonymous comments. As long as you sign your name, all sarcastic remarks are welcome. :) Thankssss